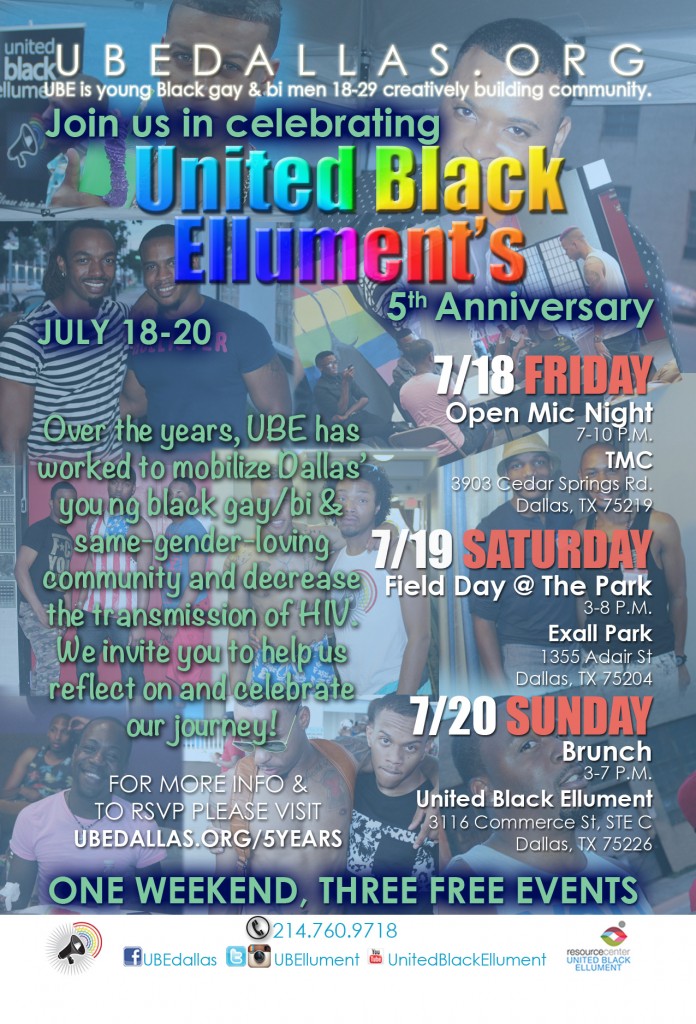 Did you know that U-BE is five years old!?!

In June of 2009, the doors at 3116 Commerce St, Suite C, opened to begin mobilizing Dallas’ young black same-gender-loving men to change for a better tomorrow and raise awareness about HIV/AIDS. As a program of Resource Center, United Black Ellument (U-BE) has reached over 13,000 people as it marks it’s 5th year anniversary with a renewed mission to empower young same-gender-loving men to constantly strive for greater while continuing to raise awareness around sexual health.

We would like to thank everyone who has contributed to the success of the program and advancement of the community. We invite you to help us reflect on and celebrate our journey, July 18-20.

Fri. July 18 – Open Mic Night 7-10 PM
Do you have poem that is as strong as Nikki Giovanni, or can sing like Mahalia Jackson? United Black Ellument (U-BE) is kicking off our 5-year anniversary with an “Open Mic” night to dedicate to those whose lives we touched over the years, by making their voice, ours. This classy affair surly will have your eccentric soul feeling so hip, that your errors will be correct.

Formerly known every year as the UBE Anniversary Block Party, renewed and reinvented the UBE Anniversary Field Day will be a day you don’t want to miss! Come out and enjoy live performances, great music, FREE FOOD, games and much more as 5 community teams compete for the title of “UBE Community Champions” in a friendly competition of high intense games. Teams representative of segments and groups throughout the community will go head to head for the ULTIMATE community title. Prizes, giveaways, and much more will mark this as the family event of Summer 2014! Come out and support UBE and root for your favorite team while enjoying the company of Black Gay Dallas!

Nothing is more grand and swanky than a mid-day brunch in the south, join us as we toast to 5 successful years of changing lives in the young black same-gender-loving community. Our chic-modern brunch will embody all of the trimmings of a down home meal, but in a southern ambience. A U-BE event wouldn’t be complete without the attendance of who’s –who of Dallas Gay Social life, to end our weekend dedicated to strengthening the love of same-gender-loving black brothers and sisters.

Online event registration for United Black Ellument Presents : The Southern Brunch powered by Eventbrite
Remember to update your HIV status by getting tested every 3 – 6 months, and encourage your friends to do the same.
Visit hivtest.org to locate a testing location near you!
U-BE Happenings
Jalenzski Brown
0